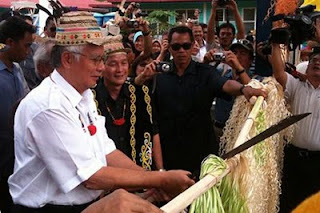 PUTRAJAYA: Datuk Seri Najib Tun Razak on Wednesday expressed his deepest appreciation for the 11,000 Orang Ulu of Sungai Balui, Sarawak who were willing to relocate for the realisation of the RM7 billion Bakun hydroelectric project.

The prime minister’s immeasurable thanks went not only to this indigenous group but also to all the people of the ‘Land of the Hornbill’.

“They, especially the indigenous group, were willing to move from the project site and water catchment area to the resettlement scheme set up for them,” said Najib at the signing of the agreement on energy purchase between Sarawak Hidro Sdn Bhd and Sesco Bhd, here.

He said the indigenous Orang Ulu in the upstream and downstream areas of Sungai Balui were relocated in stages from 15 longhouses to the settlement area in Kampung Sungai Asap, Bakun.

“This community had made a big sacrifice and given undivided support to the government by willing to move to a new area and allowing the government to relocate the graves of their ancestors as well as the warriors killed during the Confrontation period,” added the prime minister.

The government’s mega project is situated at Sungai Balui, a tributary of Rajang River, the longest river in Malaysia, and 37km from Belaga town in the Kapit Division.

Electricity generated from the dam with a capacity of 2,400 megawatts will be used for industrial development under the Sarawak Corridor of Renewable Energy (SCORE) agenda, particularly for the identified heavy industries.

“Definitely their deed and kindness will always be remembered and appreciated. The government will not waste the sacrifice made by the indigenous community who relocated to make way for the project,” said Najib who is also Finance Minister.

He said RM534 million had been allocated by the government on relocation and compensation and on the resettlement area for those affected by the project.

Besides that, he said, the government also provided them with basic facilities like a clinic, school and multipurpose hall in order to improve their quality of life.

“The houses occupied by them now have been given free to them by the government and they are provided with clean water supply.”

Najib said monetary compensation and a plot of land were also given to each affected family to grow crops or breed livestock to ensure them steady sources of income.

He said the high commitment of the Bakun project developer, Sarawak Hidro Sdn Bhd, could be seen in its contribution to the affected local community including building toilets and four residential schools, and providing water supply through underground channels, all costing about RM1.5 million.

Najib said 5,340 occupants of 21 longhouse s in the downstream area of Sungai Balui and 292 families in the upstream area had been enjoying these facilities provided by the developer since last year.

He said the Sarawak government, meanwhile, through Sesco Bhd, and with the cooperation of the Rural and Regional Development Ministry, was drawing up a plan to channel electricity from Similajau to Kampung Sungai Asap for the local community to further enjoy the benefits of development.

Najib also said that the Sarawak government could take the opportunity of making the Bakun dam like the Kenyir dam in Terengganu and Sarawak’s Batang Ai dam as an eco-tourism destination.

“The uniqueness of the flora and fauna found in one of the highest dams in the world has the potential of drawing tourists to this area.”

He said the 695-sq metre Bakun water catchment area in the hilly interior of Sarawak would in future be the biggest man-made lake in the country.

According to Najib, the Bakun Hydroelectric Station was expected to begin generating power from its first turbine in August this year, followed by the other turbines (one every three months) until the eighth turbine in 2013.

The Bakun project development has reached 98 per cent and the water level in the dam was at 202 metres above sea level on April 30, 2011. — Bernama