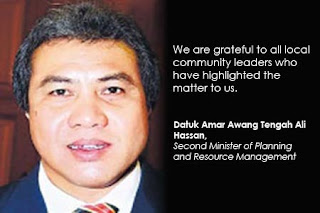 Second Minister of Planning and Resource Management Datuk Amar Awang Tengah Ali Hassan told the media yesterday that the operation would start immediately to curb the illegal loggers and gangsters who have been harassing the locals, harvesting logs illegally and hampering the daily collection of debris and floating logs in the lake.

Awang Tengah, who is also Minister of Public Utilities, added that the SFC had conducted a major operation against illegal logging from April till June this year, which resulted in the seizure of 500 logs and an illegal sawmill.

“We are grateful to all local community leaders who have highlighted the matter to us. To fight such illegal activities, cooperation from the people is very much needed. The government encourages the people to lodge reports so that immediate action could be taken,” he said at a press conference held at his office at Wisma Sumber Alam in Petra Jaya yesterday.

Awg Tengah also said that SFC had issued a licence for the collection of debris and floating logs within the 5km radius of the Bakun Dam to a company called Wargana Consortium Sdn Bhd formed by the local people themselves, for the period from July 15 this year till Jan 14, 2012.

It was reported in this paper yesterday that illegal loggers and gangsters had been conducting their activities at the Bakun Lake for the past 10 months. The presence of these outsiders had created fear among the locals looking for fish, wild animals and other jungle produce in the area.

Urging the government to act immediately, the leaders said that the groups had already brought in their heavy machineries, tugboats, speedboats and the likes. Many others are engaged in armed gangsterism for protection and to threaten others.

The residents are also complaining of log jams at the jetty near the dam site due to the illegal logging activities. They also complained that they were forced to sell the logs that they themselves fell to these gangsters