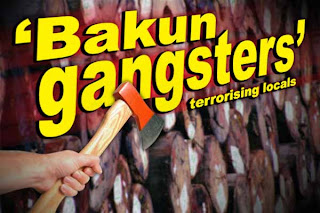 BINTULU: Illegal loggers and gangsters have been harvesting logs illegally and with impunity at Bakun lake for the past 10 months, disturbing and hampering the daily collection of debrisin it.

The presence of these outsiders has created fear among locals looking for fish, wild animals and other jungle produce to make a living.

Representatives of the Orang Ulu in Belage led by Pemanca Umek Jeno, Pemanca Tony Kulleh and Pemanca Ajang Sirek expressed concern over the possibility of untoward incidents occurring among the local people or between rival business groups involved in this illegalactivity.

They urged the government to act immediately – through its enforcement and security agencies – against rampant illegal logging activities being carried out by these outsiders around the Bakun lake area.

“They have brought in heavy machinery, tugboats, speedboats and longboats to the area and some even engaged well-armed ‘gangsters’ for protection and to threaten others,” they said. Another complaint from local residents is logs from the illegal logging often cause log jams at the jetty near the dam site, said the leaders.

“We hope the authorities concerned will act fast and put a stop to this as it is not good for the district and can jeopardise the safety of residents involved in site clearing for fish-farming projects in the lake.