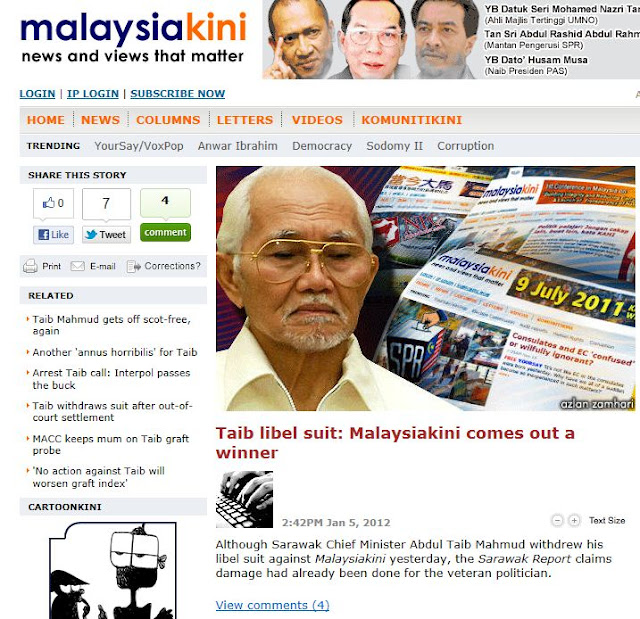 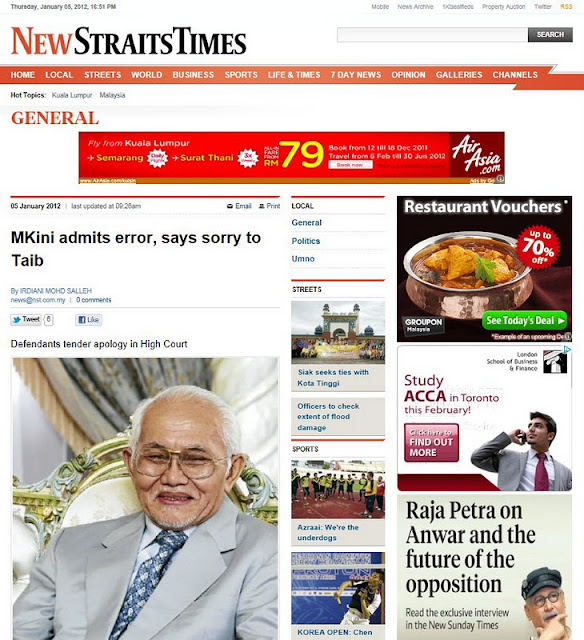 KUALA LUMPUR: SARAWAK Chief Minister Tan Sri Abdul Taib Mahmud withdrew his defamation suit against Malaysiakini after the news portal tendered an apology in the High Court yesterday.
Judge Rosilah Yop recorded the statement and struck out the suit. She made no order as to costs.

The suit is in relation to 12 articles published in Malaysiakini between April and May 2007 alleging that the chief minister received kickbacks for timber extracted in the state.
In his suit filed in May 2007, Taib said the articles were defamatory as they alleged that he had amassed RM32 million from unlawful activities, pertaining to the timber trade, in Sarawak.
The articles also alleged that he had accepted bribes from Japanese shipping companies and, therefore, had committed a criminal offence.

Taib had named MKini Dotcom — the publisher of Malaysiakini — and the news portal’s editor-in-chief, Gan Diong Keng, as defendants.

In a statement read yesterday by counsel Fahri Azzat, who appeared for the defendants, they conceded that the articles were published based solely on the news reports of several Japanese media.

“We did not verify the truth of news reports by the Japanese media with any other authorities or the plaintiff.

“We understand that the Tokyo Regional Taxation Bureau has since reversed its decision on this issue, which renders the imputation of kickbacks to be wholly unfounded and without basis.

“The defendants acknowledge that the articles were erroneously published.

“We regret any such unintended insinuations and undertake to refrain from publishing any further news reports or statements about the plaintiff in relation to the issue.

“We acknowledge that the articles caused the plaintiff embarrassment, distress and injury to his reputation and apologise for any inconvenience caused to him as a result.”