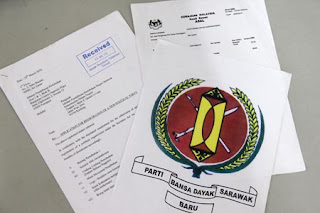 KUCHING: Would the once mighty Parti Bansa Dayak Sarawak (PBDS) ever see the light of day again?

It has been 15 months since a group of loyal PBDS members submitted an application for the formation of Parti Bansa Dayak Sarawak Baru (PBDS Baru) but so far no news has been heard from the Registrar of Societies (ROS) headquarters in Putrajaya regarding the application.

PBDS Baru pro-tem chairman Louis Jaraw who had hoped that the registration would materialise before the last state election, is now pinning his hope that PBDS Baru would eventually be established regardless of when.

“I’m not sure about the reason and why it takes so long. We have not received any news on the application’s status. When we submitted our application on March 26, 2010, there was no problem from the state ROS. It is now pending at its headquarters.

“We are hoping for positive feedback and the green light so that we can move our machinery and bring PBDS Baru to new heights,” stated Jaraw,

who is a practising lawyer based in Sibu, when contacted by The Borneo Post yesterday.

He also disclosed that the pro-tem committee chose PBDS Baru as its new name following a move by West Malaysian based party Umno to re-establish the party as Umno Baru when it was declared an unlawful society in 1987 following an internal conflict between its ‘Team A’ led by Tun Dr Mahathir Mohamed and ‘Team B’ by Tengku Razaleigh Hamzah.

Mahathir then formed Umno Baru with its leadership comprised entirely of ‘Team A’. Umno Baru in turn decided that the word ‘Baru’ was superfluous, and officially dropped it from its name, in effect claiming to be the true successor to Umno instead of Razaleigh’s party, which would eventually call itself Semangat 46.

Jaraw explained that PBDS Baru would do the same considering the precedent set by Umno.

In addition, he mentioned that the idea to form PBDS Baru was based on a finding from a statewide survey, which revealed that many former PBDS members who remained partyless had requested for the formation of a new PBDS.

“Many had enquired if PBDS would ever be reinstated or would there be a new PBDS-like party. Surprisingly, there are still many old members who remain loyal and younger generations who are eager to continue the struggle of PBDS for the Dayaks,” he continued.

When asked whether PBDS Baru would focus solely on the struggle of the Dayaks, Jaraw mentioned that it would continue its struggle for those defined as Dayaks.

He explained that the word ‘Dayak’ under Article XXIII of the constitution of the proposed Parti Bansa Dayak Sarawak Baru was defined as ‘people’.

As such, in the context of this constitution, the word ‘Dayak’ would include all Malaysians born or domiciled in the state of Sarawak.

It was also understood that a senior executive of an international company operating here, James Jalai is the pro-tem secretary-general.

Jaraw however did not disclose who would be the main figures behind PBDS Baru, such as its advisors, other committees and so on, leaving the guessing game open.

In the election, PBDS managed to win 15 seats while another opposition party Permas captured five.

The Barisan Nasional coalition narrowly won by eight seats when it captured 28 out of the then 48 seats in the State Legislative Assembly.

PBDS remained in the opposition until it was re-admitted into the state BN coalition in 1994.

The party has been dissolved since.

Former PBDS leaders who were aligned to Tan Sri Dr James Masing formed Parti Rakyat Sarawak, which was approved by the ROS and duly accepted into Barisan Nasional on the very day PBDS was deregistered in 2004.